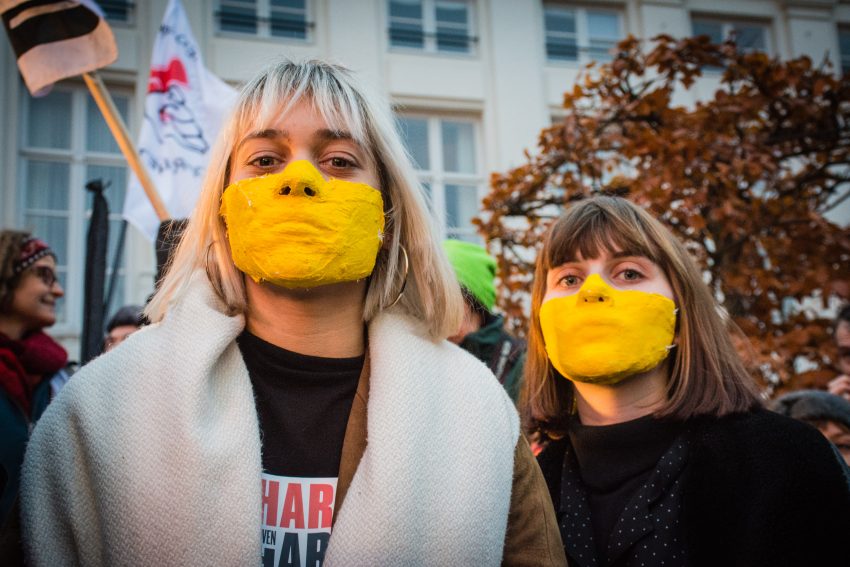 When the Flemish Government announced the budget cuts in the cultural sector on November 8, 2019, SOTA organized an action meeting in Beursschouwburg, which was attended by 2000 people. Read about the choices of the policy summarized by Kunstenpunt here.

One of the many ideas that were pitched that night was -60% yellow, a campaign proposed by BBDO. Two days later this action was shared by 500 best-known artists and the hashtag #thisisourculture was spreading rapidly. The action began to take on a life of its own. People made a facebook filter with which they could make their profile picture 60% yellow and coloured the platform 60% yellow in no time.

Artists from all disciplines and people who want to express their protest started working with the 60% yellow surfaces. Theatre houses unpacked with actions. Kaaitheater coloured its website 60% yellow and even partially pasted the posters on the facade. Other houses asked their audiences to cover 60% of their faces with a yellow leaflet.

In Hasselt anonymous artists exhibit 60% yellow paintings in the city. Musician Ioana Mandrescu did a performance of Beethoven’s Moonlight Sonata in which 60% of the notes were deleted. And these are just a few of the initiatives that are being set up everywhere.

The online petition to reverse the decision has been signed by more than 65 000 people.

On November 12, 2019 SOTA called for protest in front of the Flemish parliament. Minister of Culture and Minister-President Jan Jambon explained there his plans in front of the Commission of Culture. This was an opportunity to show our disagreement before 19th of December when the parliament might finally accept the policy document of culture 2019-2024. Jan Jambon wants to save 60% on project fundings, 6% for the cultural organizations and 3% for the large cultural institutions. Hundreds of people let their voices be heard that day.

On November 14, 2019 the artists of Salon Secret (Lazarus, Hof Van Eede and Kopergietery) asked the audience to join them on stage after their performance about the revolution in CC Zwaneberg in Heist-op-den-Berg as an act of support for all touched sectors. In the following weeks, 10,000 people were coming on stage in more than 100 venues, as well in the Netherlands, France, Switzerland and Spain. see the pictures.

3000 activists in front of, around and in parliament

During the next Culture Committee, on November 28, 2019 we were in front of, around and in parliament with 3000 activists. Inside, Luc Tuymans, Eva De Roovere, Piet Maris, Reinhilde and Jan Decleir make it clear: these savings are killing the sector.

The Minister of Culture announced that the Flemish Government will not change its general plans to cut funding on art and culture. He stated, that in the next future, he will look at “possible shifts within the current framework of the budgets as proposed now”. At the end of the debate, Jan Jambon’s proposal of 3% art institutions, 6% savings on organisations, 60% savings on project subsidies was definitively approved by the majority parties N-VA, CDV and Open VLD. The debate and vote did not bring the arts and culture sector any further. Watch the commission

Solidarity-in-action: a walk in Bilzen

In Bilzen a planned asylum centre was burnt down to cheers and applause, without the Minister of Culture – who is also the minister-president of Flanders – publicly condemning it. On the 28 November 2019, a group of cultural workers assembled there to demand an official denunciation of the violent attack on what is the symbol of our common human dignity. We need to act upon solidarity. In order to receive it, we first have to give it.
find out more

Although SOTA started as a response to the brutal cuts in cultural subsidies, we want to broaden our scope to the wider civil society. From the very beginning in the Beursschouwburg, solidarity has emerged as a core value. We want to take this solidarity seriously and commit ourselves to a systemic change.

The protests extend to other sectors. Together with the VRT and civil society, we raise our voices on the doorstep of the Flemish Government on December 5.

On December 19, 2019, the day the Flemish government voted on the entire budget for 2020-25, SOTA invited everyone to show that a different policy is both necessary ànd possible.

The parliament remained deaf. A long and toxic discussion in parliament yields nothing. Without any explanation, the 2020 budget proposal is approved by the majority parties. Two amendments concerning culture are voted down. Nevertheless, politicians who are committed to us let it be known that they feel strengthened by the protests.

Cuts without any discussion or dialogue

And just when we thought we could hang our yellow, pink, blue, green, purple and orange shirts in the tree for a few days, we reached the ultimate Christmas present from Jambon I. On Christmas Eve, we learn about the cancelation of the participation projects for disadvantaged groups.  Pats kaboom. Without consultation, without announcement, without ever been discussed in the Culture Committee, without any policy document.

Only days before, actress Maaike Neuville reported on her observations in the Flemish Parliament, reinforced by a firm opinion of author Gaea Schoeters and Flemish Parliamentarian Tom De Meester (PVDA) , in which the annoyances about the state of affairs were not concealed.

All the more so because artist Kobe Matthys managed to uncover another delicate detail. Claiming his right for public access to information, he requested documents on 2 December, which would explain the decision on the government’s savings. On 22 December, he received a reply saying that the Cabinet could not provide any documents on the subject.

For SOTA, Els Silvrants-Barclay, along with others, formulated a fierce opinion in De Morgen in which we questioned this contempt for the basic principles of good governance.